Wow . . . it’s funny how I can give myself a break to not blog for a week & then my lazy butt can immediately turn that into four!! So sorry I’ve been MIA, but I know many of you are doing the A-Z challenge and probably haven’t even noticed I was gone.

So what have I been up to? Well, I went on a road trip with the fam for spring break. First stop, Universal’s Mardi Gras! Since we are annual pass holders, we decided to stop in Orlando for a butter beer, the parade, the Cajun food, and the Phillip Phillips concert. We watched him when he won on American Idol, and one thing you wouldn’t be able to tell from that show, is he really likes to jam with a band! I think I would’ve preferred to watch him in a small, hip bar somewhere instead, but it was still a good show.

Next stop, Charleston, South Carolina. It was our first time there, and we weren’t disappointed! Unlike a lot of other big cities we’ve visited, we felt safe walking around, and it was gorgeous! We could’ve spent all day at the museum we went to if we had the time, and our admission also included touring a historic house across the street, which was very cool. My favorite part was visiting Sullivan’s Island because it meant we got to eat lunch at Poe’s Tavern before visiting Fort Moultrie (the entire family got in for $5–what a steal!). Now, if you’re like me, you’re wondering why this famous American poet had a pub named after him there. Well, after a brief stint at the University of Virginia, Poe enlisted in the army under the pseudonym Edgar Allan Perry and was stationed at Fort Moultrie for thirteen months beginning November 18,1827.  His time on the island inspired “The Gold Bug,” a story about a mystical beetle that led to buried treasure. Anyway, very COOL décor, quick service, and delicious burgers!

I ate the Tell-Tale Heart!

Last top was Asheville, North Carolina (where 18 Truths was partially set). My sister was getting married in Black Mountain at Lake Tomahawk . . . check out the awesome view! (This lake is used for the scene where Olga meets Sam & negotiates the terms of their agreement)

Even though we’ve been to Asheville twice, we never had time to visit the Biltmore Estates so we made sure to leave a spot open for it on this trip. If you don’t know, Biltmore is the largest privately owned home in America, still owned and operated by George Vanderbilt’s descendents. It has 250 rooms, and you can tour 47 of them. Two of the rooms were my favorite: the library, which houses over 10,000 of the 23,000 books in the Biltmore House collection and contains an impressive eighteenth-century canvas on the ceiling; and the banquet hall. With a table that seats 64 and a ceiling that arches 70 feet into the air, the hall houses five sixteenth-century tapestries, flags to represent the original 13 colonies, three fireplaces, and a huge pipe organ in the balcony. 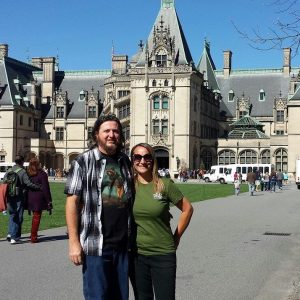 We’re thinking of buying this place for our summer home

So that was my trip! Since then, I’ve done loads of writing on my WIP. What have you been up to?

By the way, if any of you are interested in ready my latest YA novel, 18 Thoughts, then please consider signing up for the review tour The Fantastic Flying Book Club is putting on from June 15th – June 21st . . . that gives you two months to read the book!

These ladies, Patricia Lopez & Anasheh Satoorian, bloggers at The Unofficial Addiction Book Fan Club and at A Reading Nurse, own the book club, and they are certainly fantastic to work with. And Lord knows I could use some more reviews for 18 Thoughts. It came out on January 28th, but it only  has 23 reviews . . . 4.9 out of 5 stars though, and it hasn’t stopped trending in the top 100 in Amazon’s coming of age category! So if you like that sort of story with a paranormal twist, then please consider signing up here for the review tour 🙂

Next week, I’ll post about my first visit to a virtual school.