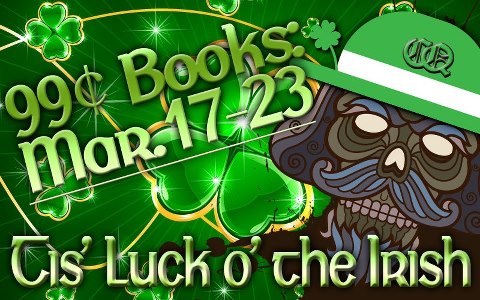 Here’s a list of the participating books:
18 Things by Jamie Ayres *YAHOOOO!!!*
The Charge by Sharon BaylissEver by Jessa RussoBlow up the Roses by Randy AttwoodTheocracide by James WymoreFade by Ayden MorganThe Green Man and Other Short Stories by Rand LeeThe Gathering Darkness by Lisa CollicuttSanity Vacuum by Thea GregoryLegasea by Krystalyn DrownThe Devil You Know (Nick Englebrecht Trilogy Book 1) by K.H. KoehlerDeath, the Devil, and the Goldfish by Andrew BuckleyNefertiti’s Heart by AW ExleyParadise Earth: Day Zero by Anthony MatheniaDeath by Chocolate by Johanna PitcairnBone Wires by Michael SheanShadow of a Dead Star by Michael SheanThe Green Eyed Monster by Mike RobinsonThe Prince of Earth by Mike RobinsonDanger in Cat World by Nina PostOne Ghost per Serving by Nina PostThe Last Condo Board of the Apocalypse by Nina Post The Last Donut Shop of the Apocalypse by Nina PostWilde’s Fire (Darkness Falls Series Book 1) by Krystal WadeWilde’s Army (Darkness Falls Series Book 2) by Krystal WadeWorld’s Burn Through (Chronicles of Nowhere Book 1) by Vicki KeireShadowed Ground (Chronicles of Nowhere Book 2) by Vicki KeireWet Dream by Rod Kierkegaard, Jr.The God Particle by Rod Kierkegaard, Jr.The Department of Magic by Rod Kierkegaard, Jr.Christmas in the Morgue by Rod Kierkegaard, Jr.Family Cursemas (The Megamillionaire Murders, Vol 1) by Rod Kierkegaard, Jr.
I’m pretty jacked up about this since sales for 18 Things have been down, and who couldn’t use some luck of the Irish, right?! I’ve read a number of the books on the list already, and one of them was Fade by A.K. Morgen. And she’s here today to interrupt my regular scheduled programming and give you a special message in honor of Fade‘s six month book birthday, so put on your party hats people, and give it up for my publishing sister!!

I don’t know about you, but I love birthdays, and not just because cake is involved (though cake is rather important). I love the companionship involved in birthdays. Friends and family gathering to celebrate one another is never a bad thing. And presents don’t suck either. 🙂 Some of my favorite people and I have put together a great big squishy collection of gifts just for you. Yes, you! Entering is easy as cake. All you have to do is pull up a chair, turn up the music, and click on that pretty little Rafflecopter on my blog. Winners will be announced on March 23rd. Don’t forget to spread the word so all of your friends can join the celebration, too. 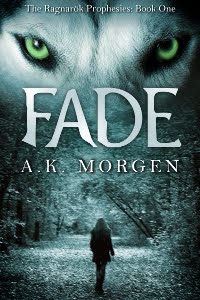 National Wormhole Day Blog Hop: March 14th Albert Einstein’s Birthday. Brought to you by Laura Eno and Luanne Smith at Bards and Prophets. And mucho thanks to author Stephen Tremp for posting it on his blog, and then sending me an email reminder (because if you don’t know me, I suck at remembering things). 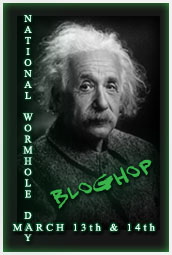 Here’s the question for the blog hop:
What would you do or where would you go if you could traverse a wormhole through space or time just once? One safe round trip passage.

I think I’d put on my foil hat and head over to the other side of the universe where the aliens hang out. I’d convince them to give me their super powers like superior intellect and the power to live a thousand years like humans did in Biblical times. How would I convince them? Not sure . . . I’m a writer, so hopefully I could make up some crap. Maybe I could agree to be their human minion. It’d be totally worth it because then I would be smart enough to find cures for all the incurable diseases and create world peace, ect . . .  and would have plenty of time to do it!

WHat*abOUt*You? What the heck would you do if you had a two-way ticket to traverse a wormhole and safely return?