She’s a science nerd with creative tendencies. And the stories she writes come to her from life’s experiences after her mind has warped them almost beyond recognition. Her first YA PNr, The Undead, is due out this year from Curiosity Quills.

Before I answer four questions about my writing process for the blog hop, I need to give a shout out to my writer peeps who hosted me during my last week of my 18 Truths blog tour. Incase you missed it:

Last Tuesday, I visited EDC Johnson with my 5 Tips For Writing Trilogies.

On Wednesday, Tyrean Martinson challenged me with the “1 Word Interview.”

Eliza Tilton brought out the teacher side of me when I guest posted on her blog on Thursday with 3 Ways to Get the Most Out of Your Reading.

Friday was Valentine’s Day, so I told Michelle Ziegler about meeting my husband.

On Sunday, I shared 18 Ways to Use 18 Things/18 Truths in Your Classroom with teacher/writer Lynn Jake.

And yesterday, I shared 18 Ways to Market Your Book with Pk Hrezo.

*Thanks to everyone for your support with the release of 18 Truths! Because of you, I have 2 books continuing to trend in the top 100 for Coming of Age Fiction! Also, be sure to check the Rafflecopter Widget in the top right corner to see if you’re a winner of one of the 23 prizes that was up for grabs during the tour (I’ll email winners as well). And my publisher is still continuing the giveaway of 10 paperback copies of 18 Truths over at Goodreads. But hurry–ONLY 10 DAYS LEFT TO ENTER (don’t forget to add it to your TBR shelf while you’re there).

I’m working on the last installment of my trilogy, 18 Thoughts. Here’s the blurb:

Olga Gay Worontzoff left the Underworld anxious to return to normal, but fate had other plans.

Now she’s caught in a world that’s a mix of familiar and supernatural, torn between past and present. All sorts of bizarre events has her senior year of high school becoming increasingly odd with every passing hour. Things like the new hottie at school reading her thoughts but nobody else’s and her best friend waking up from his coma acting like a completely different person. Now she must confront what she will—or won’t—do to save the lost soul her childhood friend has become and stare down her own perceived inadequacies to face a couple of tenacious demons, figurative and literal.

Everything she thought she knew about reality will require suspension of her disbelief as she walks the line between fear and faith, love and loyalty.

In the end, she’ll realize “normal” in the conventional sense of the word is the one thing she could never achieve.

2)    How does your work differ from others in its genre?

YA Paranormal Romance that circles around the truth of the goodness of God is not so common in my genre. When I sat down to write my trilogy, I knew I wanted a faith story that said something unique. I felt like I had an issue that wasn’t dealt with a lot in the YA publishing world . . . death and faith going hand in hand. When someone dies, especially someone young, most people cry out “Why God?” I wanted to write a story in which a teen experienced loss and was consumed with guilt, and how the loss inspired her to live freely. But I didn’t want to tie everything up in a neat bow at the end. My childhood Catholic roots, my obsession with the television show Lost, my need for radical hope even in the face of death, and my belief that we’ll always end up with the person we’re supposed to, became the ultimate catalyst for the 18 Things trilogy.

The message of my trilogy is my heart’s cry. It’s my humble attempt to put into words the message of a powerful work God did in me. Yes, it’s a fiction book, but at its core, it celebrates our significance to God. We are not forgotten. He collects our tears in a bottle. And going through hell is worth it if it leads us to the place God has. I hope my trilogy will not only entertain, but serve as a reminder of these timeless truths during this generation’s teen years—and throughout life (my oldest reader is 96). That’s why I write YA Coming of Age Fiction.

4)    How does your writing process work?

I’m a pantser by nature. So usually, I just sit my butt in the chair and write. After I’m done with my first draft, I fill in a plotting chart to make sure I’m hitting all my major and minor plot points at the right spots.

Thanks to Elsie for letting me play. And here’s 2 other peeps posting for the hop. Be sure to check them out!

Margo Bond Collins is the author of a number of novels, including Waking Up Dead, Fairy, Texas, and Legally Undead (forthcoming in 2014). She lives in Texas with her husband, their daughter, and several spoiled pets. She teaches college-level English courses online, though writing fiction is her first love. She enjoys reading urban fantasy and paranormal fiction of any genre and spends most of her free time daydreaming about vampires, ghosts, zombies, werewolves, and other monsters.

Adopted at three-days-old by a construction worker and a stay-at-home mom, Vicki Leigh grew up in a small suburb of Akron, Ohio where she learned to read by the age of four and considered being sent to her room for punishment as an opportunity to dive into another book. By the sixth grade, Vicki penned her first, full-length screenplay. She is a member of SCBWI, a co-founder of The Writer Diaries, and her short story, PRINCESS UNAWARE, placed fifty-sixth in the 80th Annual Writer’s Digest Competition in Children’s/Young Adult. Vicki is represented by Sarah Negovetich of Corvisiero Literary Agency.

Finally, I leave you with a special treat . . . the cover reveal for Shattered Secrets by Krystal Wade, releasing in just 2 weeks! 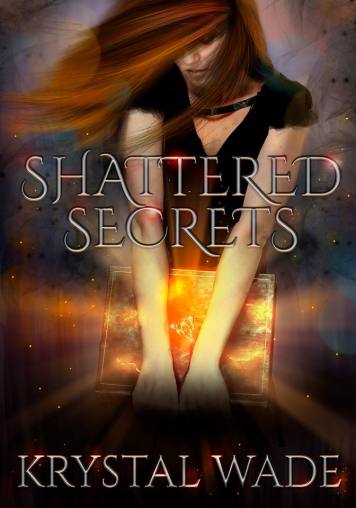 10 comments on “18 Truths Blog Tour Wrap Up, My Writing Process, and Shattered Secrets”