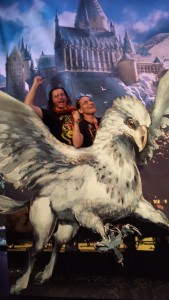 Hubs & I pimping our ride!

J. K. Rowling’s Harry Potter fantasy series gained worldwide attention, won multiple awards, and sold more than 400 million copies. In fact, the Guinness Book of World Records lists Harry Potter as not only the best-selling book series in history but the highest-grossing film series in history. Only the Bible has more translations. And I should probably mention she became the first billionaire author on the entire freakin’ planet. As I walked around Universal Studios for the Harry Potter Celebration this past weekend, on the heels of my 18 Thoughts release, all of those ‘thoughts’ on her instant success made this struggling author wonder if Jo really does know magic. I mean, she was the same as me when I started . . . an unpublished nobody. No connections in the business. No money to hire an editor to proofread her work or a publicist who could reveal the secret to marketing success. So, how did she do it? Well, I did some recon when I returned for my trip, and it turns out, Rowling and I started out differently in a HUGE way. *Confession time* My name is Jamie, and I’m a pantser. Rowling, on the other hand, planned Harry Potter for FIVE YEARS after she first birthed the idea during a train ride. Have you heard of the 10,000 hours of practice theory? Author Malcolm Gladwell says it takes roughly ten thousand hours of practice to achieve mastery in a field. You can read more about his theory here. If I divide 10,000 by 5 years, I get 2,o00. Then if I divide that number by 52 (# of weeks in a year), I get 38.5 . . . assuming Jo put that much time in every week working on HP (and judging by most Neurotic Authors like myself, I’m betting she did), she meets the criteria of putting in 10,000 hours of ‘practice’ before becoming a worldwide phenomenon. I started writing in the summer of 2009. I finished the last book in my trilogy in the summer of 2014. I’ve put in the practice. And now . . . I’ve actually planned out my next book! Success is always a struggle. My recent release left me feeling depressed. But I’m not going to think about the sales. I’m going to be laser focused on my writing this next year. I know it’s unrealistic to think I’ll be the next JK Rowling (and really, the world doesn’t need another JK Rowling . . . we are each created to do our own unique thing in this world), but I don’t believe in magic (okay, let’s be honest, I’m still holding out hope for my letter to Hogwarts). I believe in hard work. It’s the only way to get to where you need to go. And I don’t care if it takes me another five years . . .

“It is impossible to live without failing at something, unless you live so cautiously that you might as well not have lived at all, in which case you have failed by default.”–J.K. Rowling One nice review of 18 Things (the first book in my trilogy) by blogger Bruce Blanchard really encouraged me this week, so please stop by & show Bruce some love if you can! He’s over at darkenwulfbytes. Coincidentally, 18 THINGS IS STILL JUST 99 CENTS! Not sure how long that’ll last (maybe my publisher forgot to change it back to $4.99?), so snatch up your Kindle version while you can! Make sure you check out other blog posts for the monthly edition of IWSG, the brainchild of A*W*E*S*O*M*E Head Ninja Alex J. Cavanaugh.

As a sidenote, thank you to all the bloggers who participated in my “Share Your Thoughts” bloghop. You are eligible to win a prize (I’m looking at you TF Walsh, Kristina Stanley, Stephen Tremp, Head Ninja Captain, Michael D’Agostino, Roland Yeamans, Diane Wolfe, Susan Kane, Tonja Drecker, Sherry Ellis, Tangent Shell, Carrie-Anne, & L.G. Keltner)! Some of them have already been snatched up, and the early bird gets the worm! So email me at info@jamieayres.com to tell me what prize you’d like before they’re all gone. 2) Core ebook by Teshelle Combs
3) Core ebook by Teshelle Combs 5) The System ebook by Teshelle Combs 7) Ever ebook by Jessa Russo 8) Evade ebook by Jessa Russo 9) Divide ebook by Jessa Russo 10) The Charge ebook by Sharon Bayliss 12) Watch Me Burn: The December People, Book Two ebook by Sharon Bayliss 13) The Undead ebook by Elsie Elmore 14) The Undead ebook by Elsie Elmore *Also, if you’d like to enter ANOTHER GIVEAWAY (and if you wouldn’t, go ahead & slap yourself), then check out my Rafflecopter at the top right on this blog. Here’s what’s up for grabs: $25 Barnes & Noble Gift Card+$25 Starbucks Gift Card+18 Things & 18 Truths signed paperback+ an Alice in Wonderland Hot Topic Tank+Star Wars journal *You can also enter to win 1 of 10 18 THOUGHTS paperbacks my publisher is giving away on Goodreads! Finally, I leave you with a special treat. A little clip from A Celebration of Harry Potter at Universal this past weekend: Behind the Scenes Film Talent Discussion– What’s Your Favorite Spell? (I think Dumbledore might’ve been drunk for this discussion . . . toooo funny!)  Have a magical day 🙂 http://www.youtube.com/watch?v=5k8tf442UNo

35 comments on “Books Turn Muggles Into Wizards (Kind of)”