This past Saturday a twelve-year-old boy in my Language Arts classes died unexpectedly. I’m heartbroken, I’m ripped apart, I’m still in shock. But I’m also comforted. I’m going to share this story to illustrate how fictional books CAN and DO make a difference, because I know what a lonely profession this can be sometimes.

My student drowned in a canal near his home. His brother and neighbor tried to save him but were unable to revive him. For those that know my novel, 18 Things, it’s about a girl who tries to save her best friend from drowning but can’t and the book is her dealing with the guilt over that experience. My student who died went through books like water, a rare thing for a middle school boy. In fact, the first day of school, after telling me to sit him in the front because he was very hyperactive and wouldn’t pay attention otherwise (HA! LOVED his honesty!) . . . when I introduced myself and told them I’m an author, he immediately asked where he could get my novel. Two days later, he proudly carried 18 Things with him to class and told me it was his new favorite book.

When 18 Truths came out a month ago, he quickly grabbed a copy to read. A couple of weeks later, he ran to class. I told him, “Slow down!” He apologized and explained he wanted to be the first one there because he wanted to ask me some questions about my new book. I said, Ask away! I expected an interrogation about the plot twist at the end (he was quite angry with me for not having book #2 out right away after the plot twist in book #1 . . . did I tell you this was a boy after my own heart?!). You can imagine my surprise when he started asking me all these questions about God. Book #2 takes place in the Underworld . . . a recent book reviewer called it the Christian version of Percy Jackson. My student wanted to know if I made all of it up or if it was in the Bible. I told him I made it up, that’s why it’s in the “Fiction” section in the bookstore. 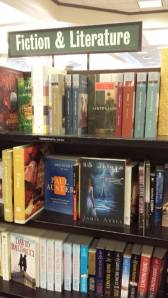 But I told him I definitely focused on the goodness of God because I think of that as a universal truth. Yes, I know we’re not supposed to talk about God in public schools, but he brought up the subject and I can’t explain things any other way except that the conversation felt right. We talked about how a lot of books that take place in the Underworld don’t mention God at all. Or how many characters act like they don’t believe in God or don’t know if He exists, even ones that have angels and demons in the plot (City of Bones comes to mind, as that’s one of the 8 books our students are encouraged to read this year for school). It was a great discussion, and then the bell rang and that was the end of it.

Then two weeks ago I announced to my classes that we were going to study Romeo and Juliet. Of course I was instantly met with groaning and gnashing of teeth. But the discussion that followed about modern-day examples of groups of people not getting along got very heated.  My student mentioned the holocaust, and much to my surprise, not only did he know practically EVERYTHING about it, my other students knew virtually nothing. It was then that I realized he (the boy who died) is Jewish. The class was riveted listening to him. Anyway, at the end of class, he told me the lesson was epic, he’d never forget it, and that when he was older, he wanted to be one of those Jewish Christians but he didn’t want to tell his parents because he thought they might be mad. I told him I thought that already thinking about such things at age twelve was very impressive, and he said, “Well, I’m a very curious kid.” I laughed and agreed with him. Then he dropped this on me: “Actually, it was your books that got me thinking more and more about God.” Can you say tears? He thanked me for the lesson, told me to have a good afternoon, and was on his way. That was the type of boy he was. Well-mannered, kind, curious, generous, always a smile for everyone, an “underdog.” He classified himself as one since he was small for his age, but always said what he lacked in size he made up for with his big personality. I couldn’t agree more.

I’m honored to have been part of his journey, though I’m terribly sad tonight. When brainstorming ideas with his class about ways we can memorialize him, they mentioned naming one of my book characters after him in the last installment of my trilogy since he loved to read and loved my books. I thought the idea was perfect.

Today I attended his funeral. As I looked at the destroyed faces of his parents, I was humbled by how easily our babies can be taken from us at any time. Even though right now I’m still questioning God about why this happened, I’m comforted that in the midst of mourning, He comes to us. In the darkness, His spirit moves. At the point of our deepest despair, He is closest. If you pray, I’d ask that you keep his family, friends, classmates, and teachers in your thoughts this week as we figure out how to move on without him.

I will say I don’t question my purpose in being an author anymore. Yes, it’s tough work, but if the sole purpose of my books was to touch this young man’s life and draw him closer to God before he died, then that’s all the reason I need to know publishing this trilogy was the right decision.