This past week, my fourteen-year-old daughter and I traveled to Orlando for LeakyCon, a fandom con birthed out of the Harry Potter book series, but has since branched out to include all things geek. We loved this con because they have a separate lit focus. I even got to moderate/present a Live Plot Twist panel with some of my fellow authors from Curiosity Quills (who has a newly launched website, so take a look)!  I also got to hear from YA bestselling authors like these . . . 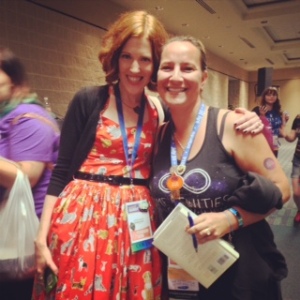 Stephanie Perkins, author of Anna and the French Kiss

Gayle Foreman, author of If I Stay

Some of the authors participated in a panel titled, “I Was a Teenage Writer.” We got to see and hear these top YA writers reading from some of their early–very early–works. Here’s a clip of John Green reading aloud from  his sample. I couldn’t film much because as you’ll hear, I was the Bozo laughing too hard and couldn’t hold her phone very still.

The panel made me want to look at the first novel I wrote back in 2009, Sarah’s Crossroads, the one I thought was so perfect, I didn’t even need to edit it when finished! I submitted it to twenty agents and dreamed at night about receiving acceptance letters from all of them and wondering how I would choose to rep the million dollar deal I was sure to get!! Bahahaha! So, for your reading pleasure today, I present to you my prologue, with some bonus cliffnotes.  The bolded comments are my thoughts while reading it today. And hey, don’t judge. We’ve all got to start somewhere 🙂 Hopefully it’ll encourage you. If I once started out with this piece of crap and landed a publishing deal for my 18 Things trilogy three years later, you can too!

In the summer after I graduated high school I accidentally wrote the novel you’re now holding in your hands. (Accidentally? What the hell?!) I blame it on my college application to the University of Florida.  Along with the application I had to write an essay. The assignment for the paper was this: Describe a setback that you faced.  How did you resolve it?  How did the outcome affect you?  If something similar happened in the future, how would you react?

It was hard to narrow it down and focus on one setback because I had already faced so many.  I could’ve talked about being abused by my uncle, my parents divorce and moving away from Michigan to the southern most state in the U.S., losing my house and everything I owned in a tornado, or mine and Ethan’s story. (Wow, can’t believe how obvious I was! Should’ve just titled this Jamie’s Crossroads)  Ethan and I are soul mates.  We were that way for as long as I can remember.  Our parents have been best friends since middle school.  By now our combined families have so many individuals that it’s like a Shakespeare drama where a variety of cast members are endlessly entering and exiting the stage.  Mom got married at seventeen years old and by the time she was twenty-six had six kids, including me.  It can be quite confusing to explain who everyone is and they only play a minimal role in this story, so I’ll wait to delve into that later. (If they play such a minimal role, why am I even mentioning this on the first page of my novel?)

I’m a mature full-fledged grownup telling you these things now; ok so a fairly new one at 18 years of age. (Yeah, full-fledged! I’m just going to tell you these things so I don’t have to show you through my actions. And why am I speaking to the reader? Nobody likes that! And why didn’t I spell out the age?!)  Like I said before, this all started with my essay.  I ended up writing about the move I took when I was 8, away from mom and my sisters and Ethan.  But I realized after that assignment I wanted to tell more.  I’ve been a writer all my life.  I was the annoying girl you come across in every Language Arts class, the one whose papers always got picked to be read aloud by the teacher as an example to everyone else.  My senior high school English teacher even went as far to say on my last day of school in front of the whole class that she was sure I’d be a famous writer some day. (Coughs *Jamie Ayres* Again, why am I telling you everything up front? So the reader won’t be surprised later?)

Well, I graduated two weeks ago and have a lot of time to kill (you’ll find out why soon enough if you’re patient). (Oh yes, you’ll be rewarded soon enough, lol) So I decided to write this novel that I’ve come to think of as a simple narrative.   I implore you to set this down right now if you’re looking for a tell-all scandalous story.  Though it may seem like just that to my parents if they ever read it.  But really it’s like a scrapbook of my life, mostly the lovely parts with Ethan, but also the secrets that you’d never mention at our family reunion. (But I’ll record it all in a book I hope gets published and sits on book store shelves across America!) In fact, at times it paints a kind of picture you’d want to burn in a bonfire at a church healing ceremony (that may sound strange to you, but they do that kind of thing at my charismatic house of praise).

I guess it’s like a diary, a written chronicle as a keepsake to pass onto my future children. (This does sound like an assignment I’d give my middle school students . . . perhaps I was still in teacher mode when I wrote this?)  I want to write it down now, before I’m too old to remember the stories I’d like them to learn from.  I’ll openly admit at the start of this thing that I’m not an indifferent commentator and as I am just 18, haven’t yet had the luxury to be healed by time, but I’d also argue that what I’ve suffered through can’t be healed by the ticking of a clock.  It’s difficult to forgive, let alone forget.  And really, I don’t want to forget, not anymore.  It’s what made me who I am today and if it hadn’t, I would’ve wasted my pain.  Like they say, whatever doesn’t kill you makes you stronger. (I want to go back in time and kill this story before I waste two months writing it!) But to explain what I mean by all of this requires me to back up a little bit and tell you how it all began.  It begins where many good stories begin (but not this one, because this story isn’t even close to being good). . . in a small town where girl meets boy.

This has been a post for Alex J. Cavanaugh’s Insecure Writer’s Support Group, where we provide a safe haven for insecure writers of all kinds! Join us the first Wednesday of every month!

And one more picture before I leave . . . daughter and I got to visit the Harry Potter expansion at Universal Studios on our LeakyCon trip. I wish I had a pensieve so I could relive that memory of walking into Diagon Alley and taking the Hogwarts Express over to Hogsmeade for the first time. So A*M*A*Z*I*N*G!!!