Today I’m kicking off summer right by interviewing another gal who goes by my name, USA Today Bestseller Jaime Rush. She’s got a new release today, so let’s get this party started  and give her a warm welcome . . . (while I pause for the virtual claps I want to say please stay tuned afterwards to hear how you can win a synopsis or query critique from Jaime, and her new book!)

JA:  This is your 24th book. Have you always known this was the route you wanted to take?

JR: Ever since I was a kid, I loved creating stories. I did go to community college for a while to be “practical,” but I sat in class daydreaming about my current book! So I gave myself a year off to see if I had what it took to write (I also worked full-time), and I did. I threw myself into learning everything I could about writing and the business, and hard to believe, but here I am, 18 years after selling my first novel!

JA:  Ah, I daydream alllllllll the time about quitting my job and pursuing my writing full-time–keeping my fingers crossed it’ll happen sooner than later. Now, Darkness Becomes Her, the 6th installment in your Offspring series, was released TODAY!! Can you tell us a bit about the book and how you came up with the idea for the series?

JR:  Here’s the blurb for the book:

A man beyond redemption. A woman beyond hope. And a battle that will either kill them…or bring them back from the edge.

Lachlan McLeod has a mission: find the beast who put his brother into a coma. He’ll start with Jessie Bellandre, his brother’s girlfriend, who’s harboring a dark, dangerous secret that could get them all killed. But as they plumb the depths of Darkness, and the light he didn’t know existed in the shadows of his heart, not falling in love with her will be as hard as staying alive. 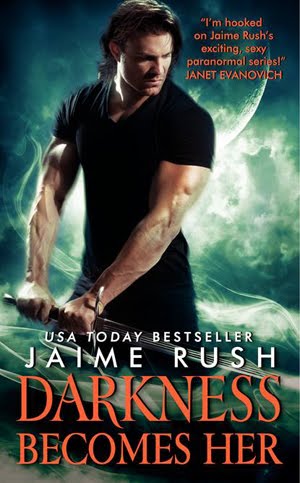 The series came from my love of television shows like Roswell and X-Files, long gone. I really liked the dynamics of people thrown together in a dangerous situation, which always tests your true character. And especially when those people already have “issues,” namely that they each deal with having some extraordinary psychic ability. Throw in that some shadowy government faction is hunting them down, that their abilities stem from a mysterious experiment each had a parent in, and that those parents are all now dead, and you’ve got the overall arc of the first four books. I didn’t even know all the facts, or how all the characters played in, which made it fun for me.

Now that I’ve completed the arc, it’s fun to spin independent stories while still weaving in the original cast. So new readers can pretty much jump into DARKNESS BECOMES HER without worrying about catching up on a lot of backstory.

JR: Absolutely, and I think we all have the ability to tap into our sixth sense. We’ve all had “gut feelings,” right? Everyone has a story about hearing a voice telling them to maybe get off the road or change lanes right before something happens that would have injured or killed them. I also know there are a lot of fakes out to take advantage of human nature’s need to know the future or understand the past.

JA:  Amen, sista! I personally don’t want to know what the future holds, what fun would that be?  What’s next for you now?

JR:  Unfortunately the publisher is holding off on going forward with more Offspring books. I have another Offspring novella coming out in September (TURN TO DARKNESS), with an unrelated group. And I do intend to write Magnus’s story, because I need to know what’s going on with him now that he’s … well, don’t want to give too much away!

But, being a writer, I can’t not write, so I’ve got a new series in development that I’m super excited about: The Hidden.

Miami. A melting pot of cultures: American, Cuban, Haitian … Dragons, Angels, and sorcerers. Magick hides behind the glitter and sunshine, where humans imbued with the essence of deities keep the balance between angry and forgotten gods, demons, and those of their kind who cannot fight the seductive lure of their magick.

I’ve thrown myself fully into the paranormal and am just loving it! I’ve already written two novellas and the first book. The series will debut from Grand Central Publishing sometime next year.

JA:  Wow, you are one busy lady! With all the writing that you do, does it come easy for you? What’s your typical day like?

JR:  Sometimes it comes very easy. It’s magic when it flows. Other times, like now, it’s more like pulling teeth. Life can distract, plus the many other aspects of this business. I just work through it, because it’s a job as much as my passion.

That being said, I treat it like a job, getting to work in the morning, not letting myself get drawn into Facebook chats or games or trolling the internet. I work a lot, usually seven days a week, though family time is important. And husband time <grin>.

JA:  Thank you soooooooo very much for your interview, Jaime. Do you have any parting words of wisdom for us inspiring writers?

JR:  If you want it bad enough, whatever your dream, it matters not the odds of making it, how hard it is, or fitting it into your busy life, especially when you’ve got a full-time job and family. As you squeak in twenty minutes here and there, you are making progress. As you get those rejection letters/emails, you’re making progress. Every step takes you closer to your dream, and if you really, really want it bad enough, I believe you’re meant to make it happen. So never give up!

Want more Jaime Rush? She wrote 14 books under the name Tina Wainscott, most paranormal romantic suspense (but not Offspring). You can check them out at Tina Wainscott titles. She also participated her first anthology novella in 2010, Bitten By Cupid, and it hit #13 on the NY Times List. Be sure to check that one out, too!

Jaime has graciously agreed to help me celebrate 400 followers by offering a synopsis or query critique–your choice:) But please limit it to 2 pages. Also, her publisher is offering her book for a giveaway! To enter for either, just leave a comment below and then stop by here next Wednesday to see if you’re the winner & claim your prize:) Until then, Jaime will be stopping by so feel free to leave a question for her!